By Ulrich Hinsen on 25. Januar 2013 in Strategic Management 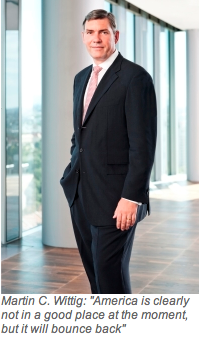 Not long ago, in Detroit, an SUV hit what looked like a small dip in the road and was swallowed up by a huge sinkhole. The ground gave way after the aging water and sewage pipes below collapsed, and the car’s occupants, a woman and her daughter and granddaughter, were snatched to safety by passersby. The pictures on local TV that night looked straight out of America’s Funniest Home Videos – but they were anything but comic. The mud-covered car was a symbol of the nation’s parlous state. If you were an American baby boomer born in 1955 or thereabouts, you spent your childhood in the backs of cars speeding along newly built interstates, surrounded by products and culture that were in demand all over the world. You watched the news, and saw John F. Kennedy narrowly averting the Cuban missile crisis and promising, in the aftermath of Sputnik, to put a man on the moon in a decade and bring him safely back to Earth.

As you grew into a young adult and became interested in technology, you saw mainframe computers made by a company called IBM dominating the world markets. If you were born in 1955, you grew up convinced that this was America’s century – and that century ended with the triumph of American capitalism over Soviet communism. If you were born after the Cold War, let’s say in 1995 for the sake of argument, you’d have been six when the twin towers fell. You’d have seen thousands of soldiers in Iraq and Afghanistan, and when your older siblings were old enough to read the business section of the newspaper, they would have seen the collapse first of the property market and then of the banking system. General Motors, once the world’s largest auto manufacturer, collapsed and was nationalized. An already high budget deficit exploded, and unemployment rose to European levels. Meanwhile, two Berkeley economists were causing a stir with their pessimistically titled book, “The End of Influence: What Happens when Other Countries Have the Money.” The computer you did your homework on was made in China, and your smartphone was designed in California but assembled in China, though at least the operating system was made by Google or Apple. As the child of a baby boomer, you still couldn’t use your phone in the car because the calls kept dropping: not quite as bad as disappearing into a pothole, but further evidence of America’s crumbling infrastructure.

America is clearly not in a good place at the moment, but it will bounce back, as it has so often in the past. I’m convinced of this for at least three reasons that are often eclipsed by the country’s economic, cultural, and political decline  …